I vividly recall Steve Jobs sitting down on a leather arm chair, on stage, and introducing what was the very first iPad. Meant to fill a void between the iPhone and MacBook he insisted existed. The iPad was meant to be your second or even third Apple device, next to your Mac (for Real Work) and iPhone (for mobile use).

If your computing needs are very, very limited, the iPad could be your only computer.

For my in-laws the iPad was a brilliant device. It was their first computer. Accessible, user-friendly, and given that they had no clue how Real Computers worked, they didn’t care one bit that there was no mouse support, no window management, or no support for USB drives. Just like they don’t care you can’t run XCode on it, run virtual machines, install any application you find on the web, or play Crysis.

I was never too fond of iPads myself, though. As iPhones grew more powerful, I felt the iPad didn’t add enough value. It was just a bigger iPhone to me, but with less apps. Sure, it got more functional over the years, but so did my iPhone. And honestly, my iPhone 8 handles most of my ‘quick computing’ work, whereas Real Work gets done on my iMac or MacBook Pro. The release of iPadOS made things a little better, but not enough to make me consider looking into the iPad again.

If you use your iPad as Steve Jobs did back in 2010, then actually nothing really changed. Your iPad is still an iPad. A great secondary device, great for consuming content on the couch. But for those hoping and waiting for the iPad to become a Real Computer, iPadOS 13.4 brought something huge: Mouse and Trackpad Support. Not just as an afterthought that adds a mouse-cursor you can click touch-first elements with, but Real Mouse Support, re-invented for iPadOS.

To underpin that they were serious about this, they also released a new iPad Pro with a very interesting accessory: a folio-type iPad cover that allows ‘laptop mode’ for the iPad. Like the Surface Pro? Yeah, well, no. Forget everything you think you know about merging laptops and tablets. There’s no kickstand this time, and no alcantara either. And let’s be fair, as nice as the Surface Pro looks, Windows 10 just isn’t that good at being a Real Tablet OS. But the comparison is interesting, though. If the Surface Pro is basically a laptop that tries to also be a tablet, does that make the iPad Pro a tablet that tries to be a laptop? 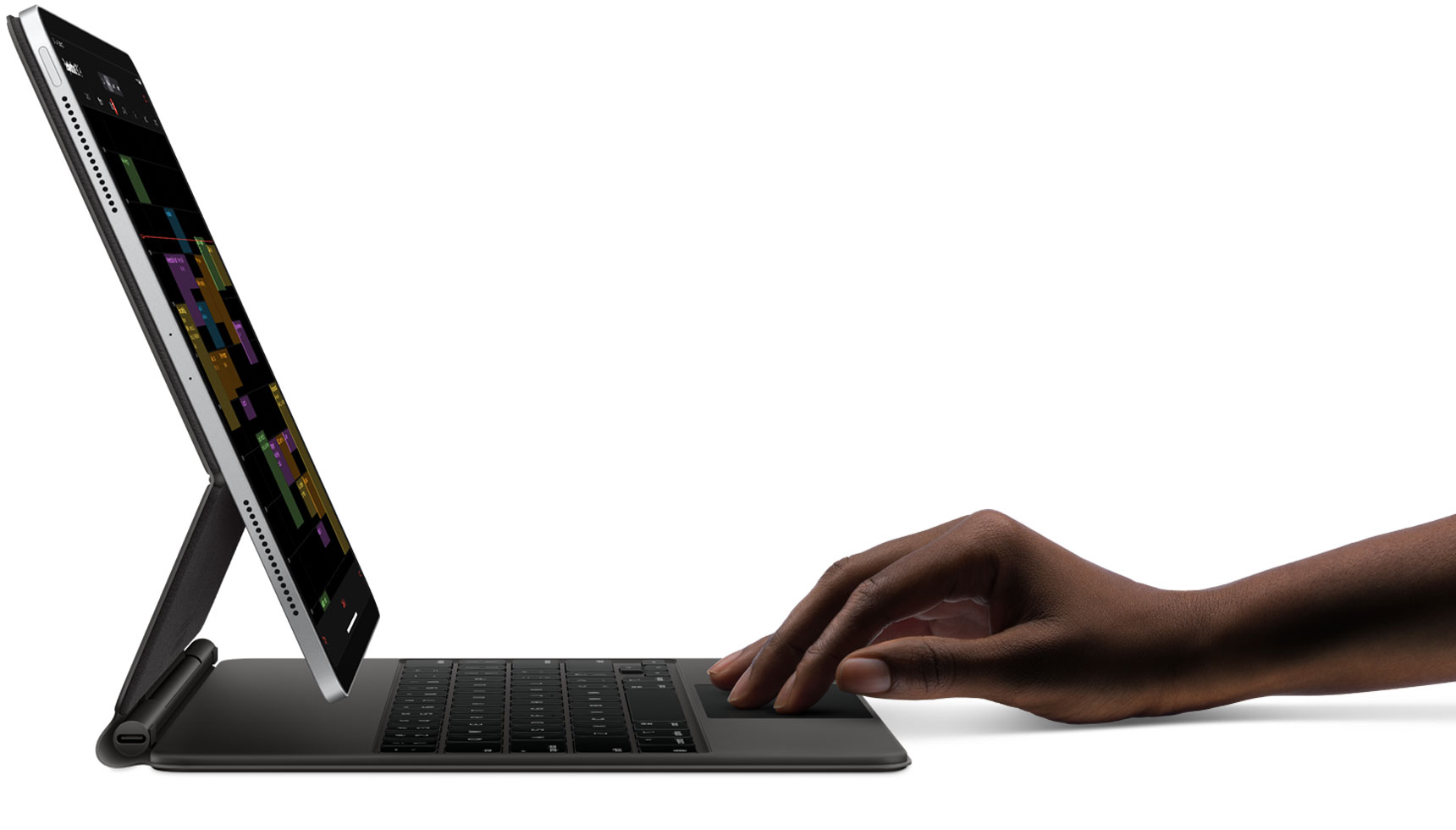 Finding out if the iPad is a Real Computer now

While I have recent and more-than-capable MacBook Pro as a work laptop, my most recent personal Apple laptop is an old MacBook Pro from 2014. But increasingly I just didn’t want to spend money on a new MacBook. But what if an iPad Pro is good enough at being a laptop that I don’t need a MacBook? Sure enough, I bought a new 11-inch iPad Pro. I didn’t buy the new fancy Magic Keyboard cover yet, since it isn’t available. But I’ve been hooking up my iPad to mice, keyboards, and even monitors to see how good it is at being a laptop.

I’m not expecting it to do everything my MacBook does, though. I know it won’t. Mac software won’t run on it, so I’ll have to look at iPad alternatives. Development tooling, Docker containers, virtual machines, Homebrew, all won’t exist on my iPad. But to me that’s the wrong perspective. The iPad is not a MacBook, so there’s no point in measuring how good it is at being one. Instead, I’m going to take the perspective I had when I first switched to the Mac in 2003. I was using Windows and Linux back then, and bought my first Mac without ever having used one. I wasn’t looking for something that behaved like Windows or Linux, or that ran specific software. I wanted to get certain things done with a computer, and was completely OK with learning new ways of doing them.

Similarly: I want to see if the iPad Pro can fulfill my Real Computing needs, and I’m OK with changing some habits in the process.

The mouse support is great, but also unlike anything I was used to on MacOS. The cursor is a circle, not an arrow. It automatically snaps to UI elements like buttons, and morphs into its shape. Is it weird? Maybe. But it makes sense, given how iPadOS is a touch-first OS with touch-first interfaces and apps. The snapping and morphing serve as very visual cues telling you whether or not you’ve successfully ‘grabbed’ something you would normally manipulate with your finger. Text manipulation, as expected, is a ton better with a mouse. I would never edit a blog post on my iPad for this exact reason, but with the new mouse support there’s not really any difference between my Mac and iPad in that regard.

Then there’s Window Management, or the lack thereof. There is support for side-by-side, slide-over windows, and some basic picture-in-picture for video if the app supports it. But there’s no Window Management as you would find on MacOS. But is this bad? I’ve been giving this some thought the past few days. Why do I even care about Windows that can partly be over one another? My computer experience has taught me to expect it, since it’s the UI paradigm that underpinned most operating system GUIs that I interacted with since Windows 3.11. But how useful is it, really? When was the last time I absolutely needed to be able to drag windows on top of each other? Most of the time I either use a tiling window manager (like SizeUP) on MacOS, or run apps fullscreen. The tiling support on iPadOS may be a tad limited, but otherwise it’s not radically different. In fact, if you’ve been using ‘native’ fullscreen windows in MacOS the past few years, you’ll find that it’s actually very similar to iPadOS.

Touch/Pen input changes the game if you compare it to MacOS. The iPad can be used as a laptop, but it can also be a tablet. I can poke it, do multi-finger gestures, and even write on it. I’ve been abusing my keyboard while putting down my thoughts in Notes.app during meetings or presentations, but now I can actually write them down in Goodnotes. Quick sketches, multiple colors, etcetera. Things I couldn’t easily do on my computer before, I can now do. Editing photos with a pencil as also a very different experience. I’ve toyed with a Wacom tablet in the past, but now I get to use the Apple Pencil on the actual photo itself.

I have yet to find a USB-C accessory that doesn’t work. My Hyperdrive USB-C hub works, my USB-C enabled Dell monitor works, including Power Delivery. Connected USB accessories, from harddisks, mice, keyboards, camera’s and even audio interfaces all worked. It’s boring, but when it comes to ports, I like boring. If it can plug into my Mac and work, it’ll plug into my iPad, and work.

(Note: I fully realize that there will be exceptions here. External GPUs won’t work, since the port on the iPad doesn’t support Thunderbolt 3. Encrypted harddrives currently also aren’t supported.)

Local development is not going to work the way you do it now. It’s that simple. However, I don’t really mind. For years I’ve been looking into options for Cloud-based Workstations, remote editing, and otherwise being able to travel without intellectual property on my systems (but still be able to work). I’ve gone from SSH/Tmux/Vim setups to playing with Visual Studio Code Remote and Visual Studio Online, and several of these approaches would translate well to the iPad. If Microsoft would care to bring VSCode to the iPad properly (even if it only supports remote editing), that would be massive. But for now, having a remote Linux/Mac instance that I can SSH into will work just fine.

In fact, I use Blink as my Terminal/SSH client which even supports my external 1440p monitor natively. It gives me a very usable setup of having a Blink/Safari split on my iPad, and a fullscreen Blink terminal on the external monitor. I’ll connect to a remote dev box, attach tmux, edit code in Vim, install tools and run containers as much as I want. I’ve used my home iMac as that ‘remote dev box’ as well, and it gives me a unified experience. I can work locally on my iMac if I want, but also quickly switch to the iPad and work from there if I want.

I could still do some coding locally using Working Copy and some editor. It looks like writing blogs that way, using IA Writer for instance, could be a pretty nice experience. I’ll probably try that in the future.

(Not) a Real Computer?

So is the iPad a Real Computer now? Well, I’m not going to say that the iPad is the future of computers, or that Macs are going away now. But after having the iPad Pro for a few days, I have to say that I’m not longing to go back to my MacBook Pro for work tomorrow. MacOS works, for sure. But the iPad handled everything I wanted it to do so far, from photo editing, gaming, writing, drawing, video conferencing, Zwift (indoor cycling), Strava, and Komoot, to coding, reviewing code, and working with cloud infrastructure. It’s a Real Computer. But it’s also nothing like the Real Computer you’re used to.