Let’s forget the UUID for now, as it is only used within the virtualization platform, and focus on the hostnames. We use our trusty DNS server to manage these hostnames, and make sure they all point towards the same machine. This means we are setting up the following DNS records:

This actually works really well. Everyone can reach the machine using the hostname that’s most logical for them, and at the same time functionality can be seamlessly moved to a new or different machine if we choose to, and all the sysadmins need to do is update a CNAME record.

Let me introduce you to an awesome application called Application A. It’s a stateless application running on a few servers and uses a Redis database. In front of it, I use HAProxy for load balancing. So it looks somewhat like this:

To wire it all together I just used CNAMES at first. HAProxy was pointing to 3 backend servers, called app[1-3].appa.dc1.bc.int, and the application servers were configured to use db.appa.dc1.bc.int as the DB backend. And all was fine.

However, when I wanted to add an extra application server, I actually needed to change quite a few pieces of configuration:

And ofcourse all these changes needed to be ‘undone’ when I wanted to scale back. I could have just ignored the HAProxy config because it won’t use a backend that’s unreachable, but the stats UI would become a mess.

So I employed PuppetDB to dynamically add and remove backends in the HAProxy configuration and firewall rules on db. Awesome! I can now scale up and down, and my HAProxy and Redis boxes will get updated accordingly.

What’s wrong with this setup?

Just when you thought we were getting somewhere, I’m going to talk about reasons this setup is bad. But there actually are some things wrong (or at least ‘less than perfect’) with this setup:

So, we are used to having multiple names for the same server. We like using hostnames that indicate certain functionality, and that remain the same if we move functionality to another server. We like having some sort of central database of information that we can use to automatically configure certain aspects of our stack, like load-balancers and monitoring.

Now what we need is all of the above, in a scalable, realtime way. Preferably without requiring ops people to do all kinds of things (by hand) for developers.

What if I told you, you can have a highly scalable, multi-datacenter, highly fault tolerant, self-repairing piece of technology that can function as a key-value store, DNS server, and even health-checking tool? What if I told you it has a REST interface as well as a DNS interface, so devs as well as ops can register a service (like an app server or database) in it, thus claiming a completely logical hostname?

If that sounds pretty awesome to you, you should definitely check out Consul. In fact, check out the introduction to Consul right now if Consul is new to you.

Application A vs. Consul

Let’s get back to Application A. We set up our application platform using CNAME records and Puppet Exported Resources, but let’s change that to Consul. Here’s what would happen:

Unfortunately, no voodoo is involved in automatically updating the HAProxy config. Neither are unicorns, for that matter. These automatic updates are made possible by something called Consul Template. Consul Template is a standalone application that queries a Consul instance and updates any number of configuration files on your system; for instance the HAProxy config file.

Using Consul Template, changes that would require one or two Puppet runs on multiple machines (and therefore anywhere between a few minutes and one hour), are now near instant.

What about my old DNS?

At this point, it’s still a pretty good idea to keep managing your A and PTR records on your current DNS setup. In fact, if you are using something like Foreman you can automate this into your VM deployment process. You might still even throw in the odd CNAME. However, you add an extra zone configuration to your DNS server, pointing all queries for the Consul TLD (e.g. bc.consul) to the Consul cluster. This does require you to use a different TLD for the records inside Consul, but that would be a smart idea anyway. So, your DNS resolving will start looking somewhat like this: 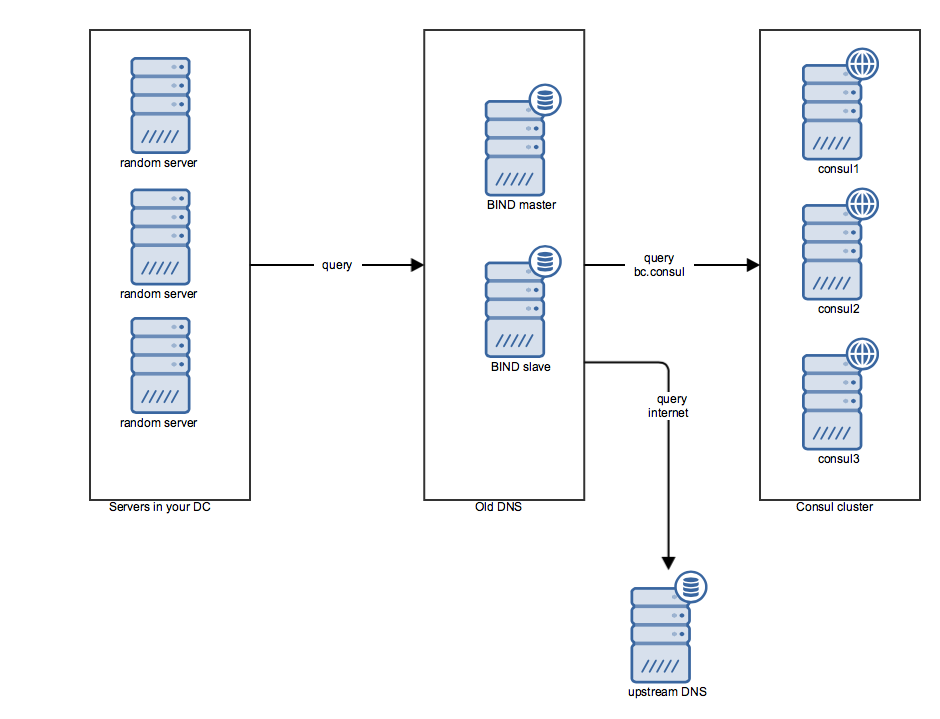 As it stands now, your old DNS is not going anywhere yet.

In theory, if you ‘Consul all the things’, you could probably do without PuppetDB, maybe even go to a master-less setup if you like. However, PuppetDB can happily co-exist with Consul while you upgrade all your Puppet modules to store their ‘exported data’ in Consul. Or you could use both.

Consul can help you achieve most of the things you might currently use CNAME records and PuppetDB for. It’s far more scalable than PuppetDB, changes are near-instant, and thanks to good APIs it’s really easy to use for both devs and ops. If you are prepared to make some changes in your Puppet code it can easily replace PuppetDB. It can also replace most (or even all) of your CNAME records, and will happily co-exist with your current DNS, that you can (and will) still use for A and PTR records.

Consul may very well be (the beginning of) the end of PuppetDB and CNAMEs, but certainly not the end of your DNS setup. And if you’ve been looking into Docker, but still figuring out how you would wire all your containers together without getting lost, Consul might be the perfect place to start.